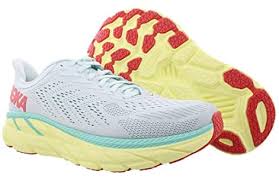 HOKA ONE ONE Clifton 7 Review

Check Price on Amazon
From the start, the HOKA ONE ONE Clifton has gone from the enfant terrible of the long-distance running community to one of the most popular lines of max cushioned shoes available. Now, with the seventh iteration of the Clifton, it’s time again to review the newest model. How does the Clifton 7 hold up against previous models, and how does it compare to competitors’ top-of-the-line cushioned runners? Let’s check it out!

Responsive and Cushioning: The Best of Both

Ever since Hoka dropped the first Clifton in 2014, the award-winning Clifton family of shoes has reshuffled the cushioned shoe market. On the one hand, there are die-hard believers in the shoes’ maximalist, hyper-cushioned style. Yet there remains a vocal group of people still skeptical of the world-famous full-length EVA foam midsole. With the Clifton 7, the people at HOKA ONE ONE make no compromises. If you loved the Clifton 6, you’ll love the 7. The Clifton 7 runs $129.99, and the price point remains on par with competing running shoes. But should you buy the 7 if it’s so similar to the 6? Ultimately, we think that the 7 is an outstanding shoe, definitely worth a buy. It could be your new favorite shoes. Indeed, the Clifton 7 doesn’t make too many radical deviations from the old Cliftons you loved before. The offset remains 5 mm. It fits true to size. The formula is essentially the same: The world-class cushioned midsole and outsole remain nearly untouched from the Clifton 6. If it ain’t broke, don’t fix it. Plus, there are other shoes suitable for longer runs that offer superior responsiveness to the Clifton 7. The New Balance Fuelcell Impulse and Saucony Freedom ISO 2 are at the top of the list. The Clifton 7 does cede some territory in responsiveness. However, its super soft EVA foam midsole is undoubtedly the most comfortable midsole out there that still manages to give you the road-feel of a faster, springier shoe. Yet the Clifton 7 has come a long way from the original model, and runners will notice big improvements in responsiveness. Shock absorption has noticeably improved, speeding up the gait cycle and turnover time. Runners with bad knees or other conditions that make longer runs a challenge will find the Clifton 7 an optimal runner that gives the best in cushioning and responsiveness. This shoe is very forgiving on the joints, even ten miles into a run.

The big update to the Clifton 7’s has been in its upper construction. The engineers at HOKA ONE ONE have done a lot of research to improve the upper’s clean mesh design, an improvement that has shaved off extra weight from an already surprisingly light shoe. The Clifton 7 weighs in at 8.7 oz for the males and 7.1 oz for the females. That puts the 7’s at 0.2 ounces lighter than the previous model. Yes, it’s not much, but if you’re like some runners, those extra fractions of an ounce can take just as much of a mental weight off your legs as a physical weight can. With the hefty midsole that is the signature of the Cliftons, you’d think that these models would be some of the heavier cushioned shoes. However, HOKA ONE ONE keeps up its reputation as one of the lightest long-distance run shoes out there. Testers of the Clifton 7 remarked on the plush, almost luxurious road feel they experienced on long rides. The Clifton 7 is ideal for anyone who wants a dependable base running shoe for recovery miles. The upper is still quite thick when compared to lighter long run shoes. The thickness is due to HOKA ONE ONE’s patented “sandwich mesh construction” in the upper. While the upper fits securely over the top of the foot and ankle, some runners found it overheats in the hotter months. The mesh upper doesn’t provide the best in breathability, so it’s better to opt for a lighter mesh shoe if you plan longer runs in the summer.

HOKA ONE ONE has been in the early stages of developing its landmark “Meta-Rocker” roll technology for a few years now. The Clifton 7 displays some of the new improvements that Meta-Rocker can bring to everyday runners. One of the recent innovations in running shoe technology has been in the adoption of beveled heels. From marathoners to ordinary runners all over the world, you can see beveled heel-designed shoes breaking PRs and improving gait. The beveled heel improves all kinds of anatomical metrics that have plagued runners with joint pain and poor foot transitions. The Clifton 7 adopts HOKA ONE ONE’s “Meta-Rocker” technology efficiently without added weight. Runners found that the Clifton 7 smoothed their turnover, encouraged a faster, less high-impact gait cycle, and impacted the knee and ankle joints less than the Clifton 6. The Clifton 7 also improved in rear foot stability, a huge plus that allows a smoother footstrike and mid-foot stability.

Plush From Top to Bottom

The Clifton 7’s stand at the top of the pile among cushioned shoes. Testers recommend these plush, super soft shoes for when your feet are tired after a long week of training, but you need a long, slow run. From the moment you pull the shoes on to the end of the run, you’ll appreciate all the plush details. One of the most distinctive details is HOKA ONE ONE’s signature heel collar or vertical pull tab. Users will find the improved pull tab easier to grasp, but the redesign also improves ankle security and reduces blisters. The soft EVA foam midsole covers the entire full-length sole, allowing calloused feet to glide over rough terrain easily. This shoe is also highly ranked in comfort for runners with a history of foot fractures and joint issues in the knee, ankle, or hips. The shoes are super flexible, and many runners have noted the Clifton 7’s allow for a lot of traction since the wider, flatter sole makes more contact with the roads than other high-cushioned shoes. The tongue is well padded, without any tongue migration.

Overall, the HOKA ONE ONE Clifton 7 serves as a good, if little-changed, addition to the Clifton line of top-of-the-line cushioned runners. Adding together the new Meta-Rocker roll technology, a lighter mesh upper, along with the softest midsoles you’re likely to find at the $129.99 price point, we recommend you check out the Clifton 7 for your next cushioned road running shoe.
Check Price on Amazon 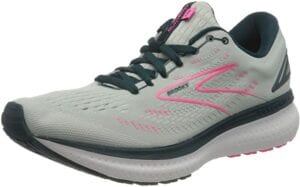 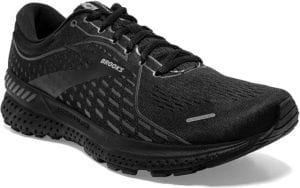